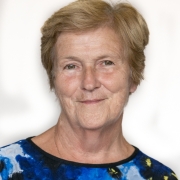 Wexford Enterprise Association (WEA) has elected Eleanor White as their new Chairman. Eleanor has been involved with Wexford Enterprise Association since it began in 1986. She was one of an ambitious group of Wexford people who sought to address ways to combat the extraordinarily high unemployment rate in the area. Since then, Eleanor has been at the fore of the expansive physical and social enterprise development of WEA.

Her dedicated work in the community development of Wexford began initially through her involvement with Junior Chamber, Wexford, an international leadership training organization which encourages young people to participate in efforts towards social and economic development. As the Wexford branch President, Eleanor was pivotal in securing the European Conference to Wexford. Ultimately, she went onto become the National President and served for a time as an international officer for the European Jaycees.

Eleanor is a current board member of the National Opera House, Wexford and is a former board member of Wexford Festival Opera, where she remains active today, working with the 300+ volunteer corp. She is also director of a local community childcare facility.

Professionally Eleanor trained as a speech therapist, having received her degree at the Royal College of Speech and Language Therapists (RCSLT) in London. She returned to Wexford as the first full time speech and language therapist for the County.

Eleanor takes over from Eamonn Murphy, who held the position of Chairman since 2017, and is looking forward to carrying on his exemplary work with the Association’s CEO and team of dedicated and talented individuals.

In addition to the change of Chairman, Colin Browne becomes the organisation’s Vice-Chairman, having previously acted as WEA’s Treasurer. Colin is currently Microsoft’s Senior Director of Global Customer Lifecycle Operations responsible for leading the implementation of the company’s Tele Sales Operations and Commercial Cloud transformation. Further details about the Voluntary Board of Management of Wexford Enterprise Association are available on www.weaireland.ie/board-executive

Wexford Enterprise Association (WEA), an independent, not-for-profit organisation, was formed in 1986 by a voluntary committee of local community, diocesan and business leaders against the backdrop of the dire economic climate of the 80s. WEA currently employs 30 members of staff within its Social Enterprise division of Wexford Enterprise Centre (WEC), one of Ireland’s first and largest Enterprise Centres, Datagroup, a national supplier of document management services, and Recycling 2000, manufacturers of animal bedding products made from old newspaper which diverts hundreds of tons of wastepaper from entering landfill each year.

These social enterprises not only create direct employment opportunities, but they also help to provide the necessary revenue streams required to partially fund Wexford based social advancement initiatives such as Youth Mental Health and Disability Employment Opportunities. Funding is also generated within their social enterprises to support entrepreneurial development initiatives like the Student Enterprise Awards programme and the TradeBridge Initiative. TradeBridge is an international trade and export initiative linking Wexford Companies with customers in Savannah, Georgia. It is operated in association with Wexford County Council, Enterprise Ireland, Savannah Economic Development Authority (SEDA), the World Trade Center Savannah, and Georgia Southern University. 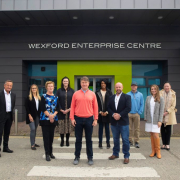 News of the further development of TradeBridge, the international trade programme between Wexford and Savannah Georgia, is expected within the coming weeks. In the run-up to the announcement, a trade delegation from the US State of Georgia, including the Commissioner of the Georgia Department of Economic Development, Pat Wilson, paid a special visit to Wexford Enterprise Centre where the TradeBridge programme is based. This high-level delegation from Georgia is visiting Wexford as part of a greater European Trade Mission.

TradeBridge was founded and built on historical ties from the time when immigrants from Wexford fled the famine and settled in Savannah. A pilot programme was launched in 2018 with the key aim of creating a trade corridor into the US for Wexford companies, as well as creating a new gateway for Savannah based businesses to export into Europe.

In 2020, a further three-year funding was granted from Enterprise Ireland under their Regional Enterprise Development Fund to develop TradeBridge into a fully-fledged Regional Development Programme. This will see it expand into the five counties of the Southeast of Ireland and sixteen counties in the Southeast region of Georgia. The pandemic slowed the progress of this programme, but is now able to forge ahead again. Details are expected to be announced in the coming weeks.

In accordance with Covid-19 Government Guidelines, Wexford Enterprise Centre is open to the General Public 8:30am – 5pm Monday through Friday. Temperature Checks at Reception and the wearing of Face-coverings at all times remain in operation. The Centre Point Cafe is open Monday through Friday until 3pm for both indoor and take-away service. Stay Safe.